That’s one small step for man–one giant leap for Mobile-kind. Nvidia Corp’s Tegra mobile platform chip plans to be used to bid a win for the $30 million Google Lunar X-Prize challenge by Synergy Moon team. The competition requires teams to travel 500 meters over the moons lunar surface, safely land a robot on the moon’s surface and send images back to Earth.

“The Tesla Prospector is a more traditional 4 wheeled rover, designed as a virtual prospector, with sensors and cameras to examine the environment and identify the mineral content of the rocks and lunar regolith. Tesla rovers will also be equipped with twin cameras for stereoscopic vision. Both rovers feature an internet based control system that will allow tourists, scientist and prospectors to take control of the rovers for a virtual excursion on the moon.” said Synergy Moon on its website.

Both the Telsa Prospector and Surveyor will be capable of autonomous operations, able to take care of themselves and carry out exploration missions on their own, saving their observations for later transmission to earth or streaming near real time video of their adventures. The Tesla Prospector will also carry a set of microbots, that will carry out specialized scientific and artistic projects. 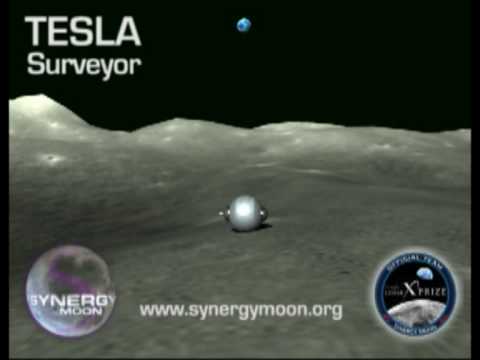